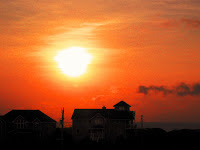 Do you think when living presidents attend the funeral of another president that they are imagining how their funerals might be different, how they might be remembered by the American people? I've watched President Ford's funeral on TV all morning. His family looks just like any other family mourning the passing of a loved one. They don't look 'presidential' or more important than anyone else. Mrs. Ford is being so stoic, but if you look into her eyes, you can see her heart is broken and that she is probably wondering if she even wants to go on living. His children are devastated - openly crying and not caring that dozens of cameras are focused on them. The children and grandchildren keep touching, hugging, moving nearer to Mrs. Ford - trying to comfort her just as I comforted my father at my mother's funeral. I can relate to that family. I could not relate to President Reagan's family. I'm not sure why. They just didn't seem as 'real' to me as the Ford family. I cried during the funeral, not because I knew President Ford, or even knew very much about him. I cried because his family brought back memories of my family - my mother's long term illness and final passing; my father's giving up on life after her death and his ultimate death from having lost the will to live; the deaths of my favorite aunts, ladies whose lives I emulate even today. And, morbid or not, thoughts of what I would do should one of my children die.
I almost lost my dear Ashley on Christmas Eve, 1998. She had been sick with a bad cold and ear infection, and started to run a high fever. Ashley has epilepsy, and high fevers can trigger seizures. As her fever climbed higher and higher, I knew that we had to go to the emergency room before the seizure started. Through some divine guidance, I decided to call for an ambulance rather than take her in my car, and that was probably the reason she is alive today.
The ambulance arrived just as Ashley started to seize. They rushed her to the ambulance and then took off with lights and siren going in the direction of the hospital. I followed in my car. Once we arrived at the emergency room entrance and Ashley was being brought out of the ambulance on a stretcher, she was STILL seizing, and had one of those blue bag things helping her breathe. The rescue squad staff rushed her into the hospital while I stood helplessly by.
Finally, one of the emergency room nurses came to me and took me to a private room in the ER, something I realized even at that moment was not a good thing. The nurse assured me someone would be in soon to talk to me and let me know what was happening.
I paced, crying, in that small room and then heard a knock on the door. The hospital chaplain came in, and that was the second thing that I knew did not portend good news. The chaplain told me that the doctors had to paralyze Ashley to get the seizure stopped. But that meant they also had to intubate her - put her on a machine to breathe for her. I was told the just be patient and that soon one of the doctors would come and talk to me.
Once the doctor appeared, he told me she was hanging on and was being moved to intensive care. I was allowed to walk beside her stretcher as they moved her. She was still paralyzed and the respitory technician was squeezing her blue breathing bag as we walked through the hospital halls. Once we arrived at intensive care, I had to wait outside the room while they hooked my sweet child up to all the machines that would do their best to keep her alive.
Ashley is and always has been a fighter. I believe she has plans for her life and that she will refuse to leave this world until she is darn good and ready. Fortunately, she was not ready that night. She recovered slowly but surely over the next three months that she spent in the hospital, touching the lives of everyone who came to know her during that time. Her seizures are pretty much controlled for the time being, but everytime she has one, or everytime she gets sick and runs a fever, I go on high alert.
She is my heart, my life and I will never stop worrying. But isn't that what all mothers do...
Posted by Ashley's Mom at 10:44 AM

Wow...the seizure you described was a lot like Evan's, including the paralysis and intubation...and the continued seizing for way too long.