Sometimes I like to visualize in my mind what it must be like to be in a wheelchair like Ronnie or Ashley. Doing so helps me figure out accommodations that can be made to help make their travels a little easier. Today I was attending a business-related conference at a local hotel and decided this would be a good time for a visualization.

Unfortunately, the first leg of my visualization trip was not so good. I had to park in the parking garage for the hotel. I tried to pull into a handicapped parking spot, but the access aisle was being used for storage. See the picture below. 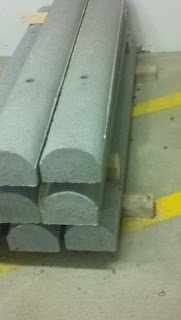 This is not an usual sight though. In the past I've seen piles of dirt, piles of snow, snow moving equipment, and grocery carts piled into the handicapped parking spot and access aisle. The way these concrete things were positioned, it was impossible to open the car door. I pulled out and found another parking spot. A person with a wheelchair may not have been able to do that.

Then my visualization took me up the elevator to the hotel lobby so I could register for the meeting. All that went well. The registration counter was lowered and had I been in a chair, I would have had no problem signing in and picking up my materials.

The next problem came when I tried to move through the hallways of the conference area. There were vendors lining each side of the wide hallway, making it not so wide. Throw in approximately 800 people, and traveling in a chair would have been nearly impossible.

There would have been excuse me after excuse me, tap-tap-tap after tap-tap-tap trying to get people's attention so I could move past. I think I would have just given up at that point, and now I understand better why Ashley and Ronnie can both get so frustrated in crowds.

Finally I found the room I was supposed to be in. It was a large banquet hall filled to capacity with round tables, each seating 8 people. There was hardly room to walk between the tables, much less move in a wheelchair. Had I really been in a chair, I would have had to just wait by the door for the entire presentation.

After the keynote, we were to move to breakout rooms for the next session. Mine was in a room with two aisles of chairs, each having 10 chairs in each row. Again, there was no room to move a chair down the aisles. I would have to park my chair either in the front of the room or the very back of the room. Either would have marked me as 'different' to the crowd.

After that session, it was back to the banquet hall for lunch. I thought I had it figured out this time. I would go in early in my chair, before the room filled with people, and that way I could get to the far side of the room to sit with my co-workers. But I forgot something very important. Had I done that, I would have been trapped in the room until everyone else left at the end of lunch. A trip to the restroom would have been out of the question.

And so the day continued - too many people, not enough room, and doors to heavy to handle while trying to also move a chair. I found myself getting very frustrated and wanting to just yell at someone. Again, I now understand Ashley's and Ronnie's behavior a little better.

But there was one thing that really, really surprised me. How could there be almost 1000 people in one location and not one of them have a physcial disability? Does that seem a little odd to you?
Posted by Ashley's Mom at 5:00 AM

You know, you wondered why there weren't that many people with disabilities in the crowd - I think you answered your own question with the rest of the article.

If you don't build it, they won't come?