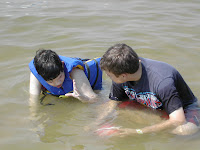 Today I would like to introduce you to one of Ashley's three siblings. Chip is my birth son and he is 16 years old. He is one of the most incredible kids to ever walk the face of this earth, and yes, I know I am a little prejudiced. I have raised Chip as a single parent since his birth father (my ex) left when Chip was 4 weeks old, and that has indeed been a blessing.

Chip is super intelligent, quite attractive, and the most compassionate kid I have ever met. Perhaps that compassion comes from being raised with a sister like Ashley, or perhaps it is just inherent in his nature. He is also a major geek and has wired our house for networking, accessing the internet, music, and suprisingly complex TV 'stuff'. That's all I can explain about it and I am a computer engineer by trade. Does that tell you how much of a geek he is? In fact, the FIOS (fiber optic) TV installer came this week to upgrade our TV service, and the installer was noticeably impressed with Chip's wiring design. The boy has got to start earning us some money with this skill of his!

Chip has volunteered at our local Science Museum and as a camp counselor for one of our local rock climbing/kayaking summer camps. He also volunteers annually for the statewide deafblind family support group, performing such functions as official photographer and childcare worker. Now that he has turned 16 though, he is ready for some paying work also!

The future holds much promise for my shining star and each day I am more in awe just watching him grow and learn....
Posted by Ashley's Mom at 10:25 AM

Did I mention that your writing is wonderful, and that Ashely is beautiful?