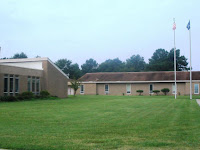 I know I've written a lot recently about the frightening and sad state of disability issues in my home state, Virginia. This is another of those posts. Virginia, long recognized as one of the worst states in providing services to people with disabilities, is sinking even further down that list, this time to 49th out of 50 states.

Why? Because once again the focus is shifting to putting people with disabilities into institutions rather than in the community.

One of our state's newspapers published an Op-Ed column this past weekend from Howard Collum from the ARC of Virginia (formerly known as the Association for Retarded Citizens. That name has been dropped and only the initials are used today).

It is well worth your time to read. And please know, what is happening in Virginia may already been happening in your state, or will soon. The state of the economy is resulting in rash and uninformed decisions by legislators forced to produce balanced budgets.

We need to all voice our committment to community living for everyone, disabled or not.


Daily Press Publishes Op-Ed by Howard Cullum,
President of The Arc of Virginia

February 28, 2010
Our Virginia state government is facing its biggest fiscal crisis since the Great Depression. The economic downturn and the loss of millions of American jobs has dramatically reduced tax revenues that pay for basic government services at all levels - federal, state and local.

Our state and local governments can't print or borrow money to solve the problem. State and local budgets must be balanced. The governor and General Assembly members have the responsibility to adopt a balanced 2010-12 budget.

While the budget cuts will be challenging, our elected officials need to look beyond short-term 2010-12 budget decisions. There are clear opportunities to reform and remake state-funded services for the future.

The Arc of Virginia has been working hard over the past year to have the state step back and reconsider its 2009 decision session to rebuild a 75-bed training center for persons with intellectual disabilities at the Southeastern Virginia Training Center (SEVTC) in Chesapeake. The decision to rebuild 75 beds was made after then-Gov. Tim Kaine had recommended closing SEVTC by June 30, 2009, as part of his budget recommendations. In addition to the rebuild on the current campus, the General Assembly for the first time ever authorized state bonds to finance 90 community beds in the Tidewater and Peninsula communities for persons leaving SEVTC.

Subsequent to the rebuild decision, a state-funded review of SEVTC residents by a nationally recognized firm concluded that all current SEVTC residents could be served in community homes. The Arc spent the rest of 2009 meeting with Kaine's Cabinet officials and agency leadership to obtain a deferral of the rebuild until the General Assembly could reassess this issue at the 2010 session.

The Arc's efforts to defer the SEVTC institution rebuild were not successful. Our Arc families were shocked by the state's decision because all of the residents can live in the community and because of the financial cost.

The institution rebuild will cost $23 million for 75 beds or $306,000 per person to build a house on the campus. Are there no homes available in Tidewater for less than $1.5 million? Meanwhile, the state is funding the building of 90 community beds for $8.4 million or $93,000 of state funds per person.

The Arc of Virginia has been on record opposing the SEVTC facility rebuild because it continues and reinforces the stereotype that there are some people with intellectual disabilities who can only be served in institutions. This is simply not true. There is no special class of persons who cannot be served in the community.
No other state is going down this rebuild road. In fact, 11 states have closed all their state intellectual disability institutions and shifted to community care. The Arc believes that the growing community wait list problem is tied to Virginia's continuing institutional focus.

Today, the average annual cost per person in one of the five state training centers is $194,000. The average cost of care for those in community homes is $95,000. Our families on wait lists don't understand why our revenue-strapped state government is insistent on using our scarce taxpayer dollars to pay three times to build and twice to operate state institutions.

The Arc believes the 75-bed rebuild violates the Americans with Disabilities Act's community integration requirement. The Arc felt so strong about this issue that it requested the Virginia Office of Protection and Advocacy to bring legal action in federal court against the Kaine administration last October seeking to stop the SEVTC rebuild. The judge ruled in December that the case was not "ripe" for judicial action as the rebuild had not yet occurred and no one was as yet in it.

In a letter dated Jan. 29, The Arc asked Gov. Bob McDonnell to suspend the SEVTC rebuild because of the high construction costs, the high operating costs, the continued segregation of persons due to their disability and the adverse impact on Virginia's future ability to fund critically needed waivers for persons now living with their families all across Virginia. These wait lists are now more than 5,900 persons with no new waivers recommended for the next 21/2 years.

It is important to understand that these persons on the waiver wait list meet the same eligibility as the residents of the state institutions. In fact, families "waive" their legal right to institutional care and sit on the waiting lists. Why? They want community care for their sons and daughters, not placement in an institution.

The issue is all about the future. The Arc wants Virginia to turn the page and reform its antiquated institutional system and adopt a "community for all" policy.

What about the persons now living in the institutions? What will happen to them? The answer is quite simple. These people will move to small community homes with all the individualized supports they need and deserve. How does The Arc know this will work? It is already being done all across the country. In addition, we're already doing it in Virginia and have been doing it here successfully for the past 40 years. Today more than 4,240 persons are already living in community homes funded by the waiver. The 5,900 people on the waiver wait lists are living at home. The 4,300 school-age children with severe intellectual or multiple disabilities attending public school special education programs are living at home.

The scary number for The Arc is the 17,000 persons with intellectual or developmental disabilities living at home with parents 60 years or older. These are the persons who will need help in the future as their parents become physically unable to continue as caretakers or die. These families do not want institutional placements for their family member; they want community care.

What about the current institution staff? What will happen to them? All the direct care and medical/clinical staff will still be needed. The Arc supports state operation of community homes using existing staff. There are concerns by families about the need for a state-operated safety net. The state can fulfill this role in community settings.

If our state government is really the country's best-managed state, it can surely step back and reassess an earlier decision to be sure the public policy and fiscal implications are understood and sound. It is the prudent and common sense thing to do. It takes leadership. The Arc is asking our governor and legislators to provide it.
Posted by Ashley's Mom at 7:00 AM