Well we had quite the exciting Monday!

Our local baseball team, the Richmond Flying Squirrels (yes that is really the team's name), was scheduled for their only noon game this season. I decided to take half a day off from work so the boys and I could go. We are all baseball nuts in this family (get it- squirrels, nuts - I crack myself up sometimes).

I met the boys at the stadium, and we settled in for a sunny and hot time. And things stayed that way for 7 innings. Then we saw some angry looking clouds rolling in. They were coming from the west, the part of town where we live. I had received emails about a severe thunderstorm warning for our area, and so we decided to duck out of the game early and head home. That was a pretty good idea.

The storm rolled through and brought with it a tornado. The tornado took out a wall at the stadium, cut power, and blew out windows. Remarkably no one was hurt. But I was very glad that we weren't there and trying to find a secure place to get into with a wheelchair.

The ride home was interesting also. We've survived two major hurricanes in the last few years, and the winds, rain, and hail from this storm looked just like those hurricanes. My two next door neighbors both lost trees, one of which took our a power line. Driving through the neighborhood a little later, we realized just how lucky we were. There were large trees down everywhere, many on houses. We have no power - along with 150,000 other people - but that is a small price to pay.

Hopefully tomorrow won't be quite as exciting....

The view to the west as the storm approaches: 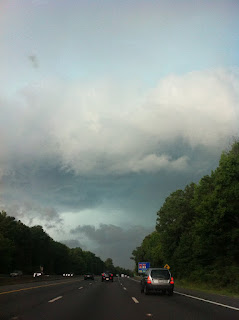 One of my neighbor's downed trees. So very minor compared to other damage in the neighborhood: 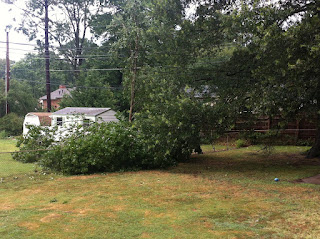 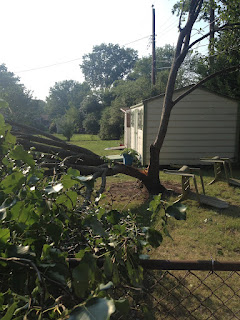