I Hope My Child Has Scurvy 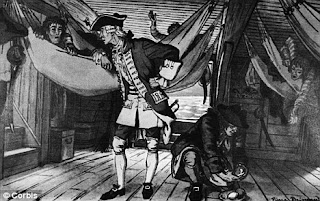 What? Does that sound strange to you? Strange that I really hope that Ashley has scurvy? Well, it's true.

About 6 weeks ago, Ashley started having problems with her foot and ankle swelling. The doctors have ruled out a blood clot - the scariest thing that could be causing the swelling. But, we are still waiting on a cat scan under anesthesia to get scheduled to see if that gives any clues about the swelling.

Then last week, Ashley came home with a strange rash-like coloration on her right forearm and hand. The school staff and I couldn't come up with anything that might have caused it, so off to the doctor we went again. The doctor called it petechiae, and immediately began scouring her medical resources to try to figure out what strange disease or condition might present with both a swollen ankle and foot and a rash on one arm.

We spent three hours in the doctor's office that evening last week. The cleaning crew was in, but the doctor and three nurses refuse to leave until they could figure something out. After 8 tubes of blood and instructions for obtaining a urine sample, we went home to wait the test results.

All the scary things have been ruled out. Ashley's glucose and electrolytes were fine. Her kidney function and liver function were fine. Test for autoimmune diseases came back negative. And finally, the urinalysis revealed nothing out of the ordinary. But the doctor kept researching, researching until she found a likely culprit - or at least a culprit that is easy to treat while we wait for other tests and the cat scan.

That likely culprit is scurvy. Yes, the disease of 17th and 18th century sailors making their way across the oceans without proper nutrition, specifically foods rich in vitamin C.

Ashley does have a very limited diet. She was tube fed for quite a while, but after a couple of years in the feeding clinic at our local children's hospital, Ashley has been eating by mouth - but not eating a wide variety of foods. As the doctor and I went over in detail what Ashley does eat, on the surface, it's not too bad. Raw spinach, peas, apple sauce, mac and cheese, hummus, yogurt, potatoes, and lots of cheese. What is missing from that list is any food to provide vitamin C.

So the doctor has started Ashley on a daily multivitamin and twice daily vitamin C, both liquids given through her G-tube. And already, Ashley's arm has improved. Her swelling is still there, but the doctor thinks that may take up to a month before we see improvement if the culprit is scurvy.

So now you understand why I say I hope Ashley has scurvy. It's very easy to treat - nothing invasive, nothing too difficult.

Here's hoping scurvy is truly the culprit!!!
Posted by Ashley's Mom at 5:00 AM

I hope so very much that your dear Ashley does have scurvy! This is definitely a chapter in the book able to be written by most special needs parents. I have decided to call mine "You couldn't make this &#!+ up!" Keep us posted and I will pray for scurvy! And thank the universe for such a tenacious doctor.