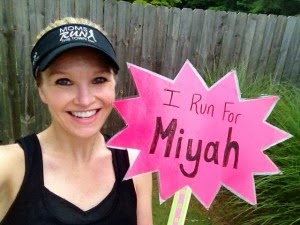 Have you heard of the organization, I Run 4? If not, you definitely should check them out.

Tim Boyle, founder of the I Run 4 organization, describes his mission:

I posted a picture for inspiration for my first official 5K run and one of my facebook friends commented on it. His comment was simple yet profound. He said “you can run for me anytime!”You see my friend was diagnosed with bilateral hip dyspasia. He was told he would never walk again. He found a doctor who was willing to perform a risky and experimental surgery over a period of two years. He spent a year in a body cast and underwent 17 months of gruelling physical therapy five days a week. He DID walk again. The miraculous results were expected to last two to three years. He recovered enough and so strongly he competed in the Olympics… The Special Olympics. You see, my friend Michael Wasserman has Down Syndrome. This “Old Champ” (as his mother, Mary, calls him) stretched out this miracle 24 years and 24 days. He is now in a wheelchair and can no longer run. But that’s not the end of the story… he has been inspiring me for several months with his artwork which he sells in facebook auctions and donates 100% of the proceeds to charity. Last year alone he raised $2500! So I RUN FOR MICHAEL!


I Run 4 pairs runners with children and adults with disabilities. In Tim's words:

The mental and emotional encouragement for both runner and honorary runner is proving to be a whole new level of motivation and awareness. Runners are able to find a whole new sense of purpose in their running while sharing who they are running for and bringing awareness to diseases and disabilities of all types.


Ashley's runner is a wonderful young woman named Maggie Clegg, and Ashley loves getting pictures and messages from Maggie! I urge you to check out both the organization's website and their Facebook page. Then strongly consider signing up to be either a runner or a runner's inspiration! You won't be sorry!
Posted by Ashley's Mom at 4:00 AM