In part 1 of this discussion, I asked the question:

Do you believe that nurturing creativity from a very young age might serve as a foundation for a future life goal, perhaps even employment?

This...this is why I asked that question...

I believe that one of the most important things about our child's development and education is left out in most special education programs - fostering their creativity.  So much time is spent on functional and life skills and almost no time is spent on encouraging our children with disabilities to dream, create, and invent. 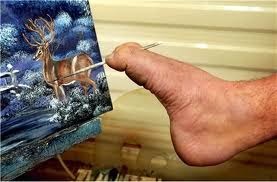 Sure, when they are small, classrooms often include markers, paper, glue and glitter, but in my experience with my children with disabilities, the little ones receive a lot of *help* so their creations look good, or at least look the way the staff thinks we want to see our children's artwork.  I saved almost none of the art projects that came home looking decidely different than I knew my children would have done.

Then by the time middle school and high school roll around, art class is viewed as an *extra*, something to fill an hour or so if there are not life skills classes to be found.  When my children were offered art class in these school years, they were pretty much situated at a table and handed markers and paper.  Even though they were more than capable of following an art lesson, they were usually labeled as incapable and the staff was able to pat themselves on the back for *including* the children.

But I refuse to accept that.  Reaching into the creative parts of our brains, I believe, helps the other parts to grow.  Once our children with disabilities are allowed to explore their creativity, they learn to explore other aspects of their lives, and ultimately build upon their self-advocacy skills.

Ashley, for example, has participated several times in her school's PTA Reflections contest.  Did her work look like or sound like that of non-disabled students of the same age?  Not usually, but what she did create was beautiful in its own way, the same of which could be said for her.  She learned to try, to feel, to test, to combine things in a way her mind deemed *right*.  She learned to relax through the therapy art can provide, and she learned to define what beautiful meant to her.

But those lessons came at home, not in the classroom.

What about you and your children?  What things have they experienced that drive their creativity?  What things have you done to encourage their exploration?  Do you feel it is important to nurture their creative side even if it means less time might be spent on learning to do laundry or cook or make the bed?  Do you believe that nurturing creativity from a very young age might serve as a foundation for a future life goal, perhaps even employment?

Is creativity an important quality in any person, even people with severe disabilities?  I believe it is, but I'm very interested in your opinion....
Posted by Ashley's Mom at 11:36 AM No comments:

Everyone Needs A Geek

So what do you do when your cable TV service goes out on the night when the finale of the show you have been watching and obsessed about all season?  Well, if you are lucky like me, you call your resident geek (Chip) who with his special powers connects some cable on the TV to the metal star sitting on your dresser using only packing tape, turns the start just so, and voila!, the only channel that comes through is the one you needed!! 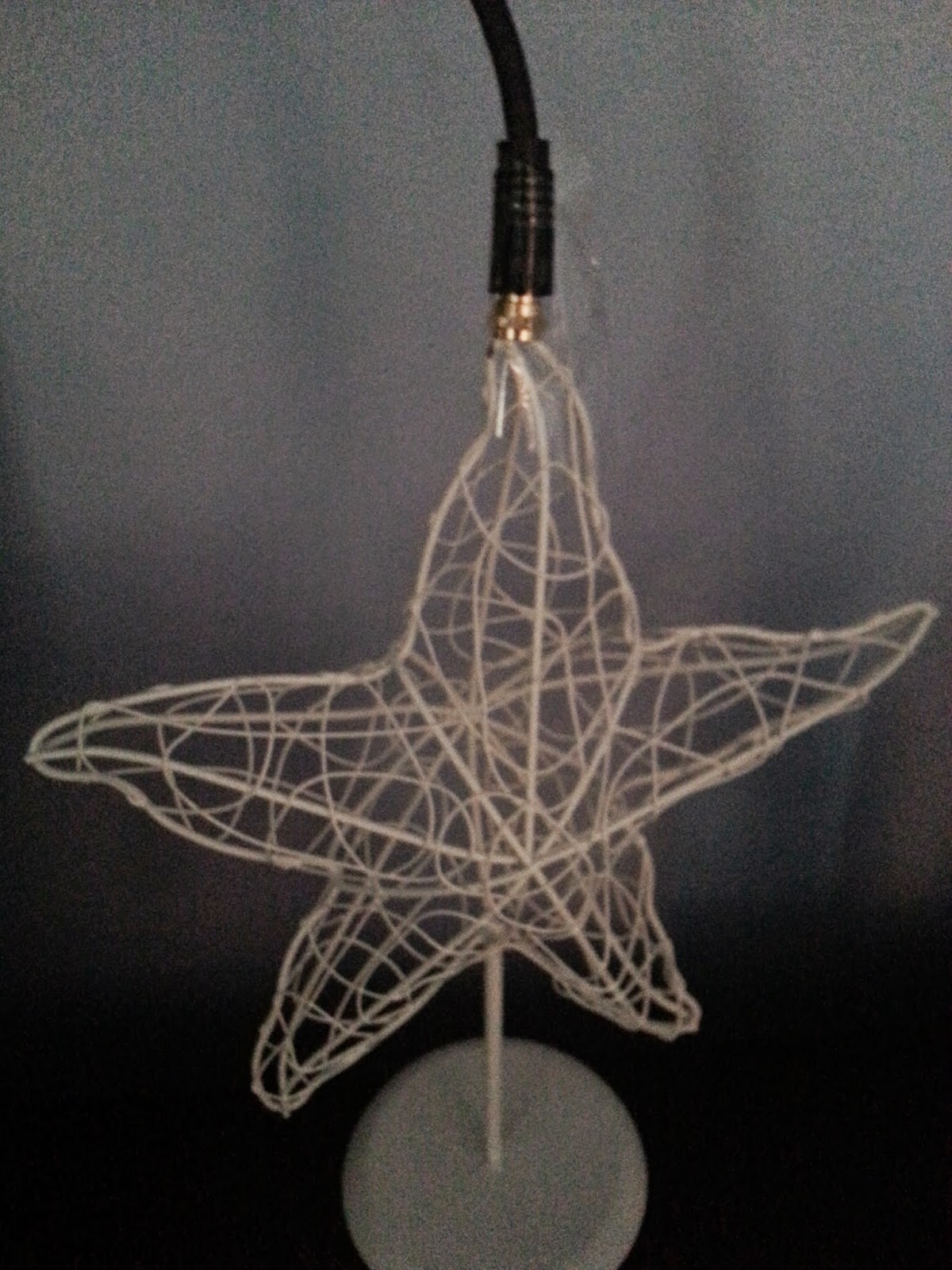 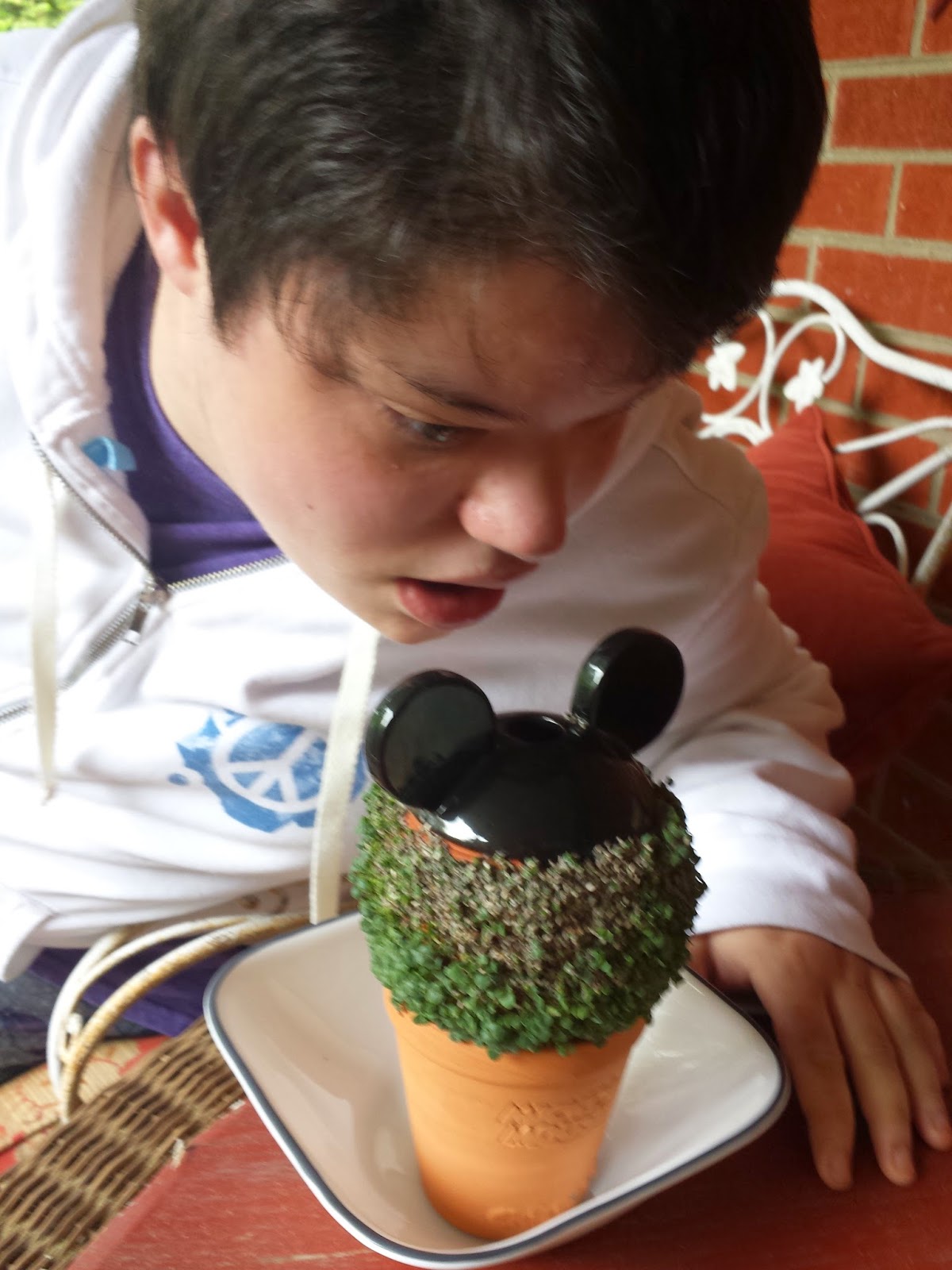 Just because you spend many hours trying to educate your children on Internet safety, don't assume they practice it. 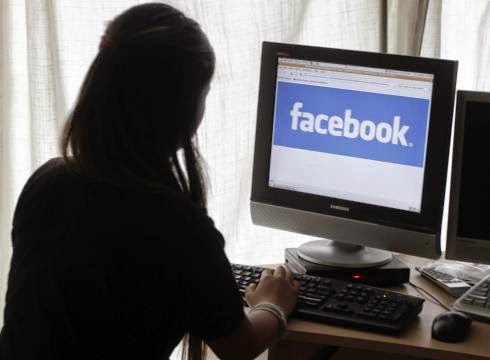 Just because our school systems have classes, assignments, and lectures on the subject of Internet safety, don't assume your children are receiving the message.

And in case you think you have enough parental controls on your computer to keep your children from doing something they shouldn't, more than likely you don't.

My son, Ronnie, loves Facebook and its associated apps (instagram, oovoo, etc.).  Because he uses sign language and most of his friends don't, being able to type messages and shares pictures over his computer apps seems like a perfect match made in technology heaven.  However, it's not just his friends who are using those apps, and not just his friends that are communicating or at least trying to communicate with him.

Last week, a young lady (at least the picture on Facebook was of a young lady) attempted to engage Ronnie in conversation.  That's a pretty easy thing to do since Ronnie is very social, especially when it comes to attractive young ladies.  The conversation seemed innocent at first, but soon turned to the young lady asking Ronnie if he would like to see her on her webcam.  He was thrilled, and of course said yes.  She said that she needed him to charge something on his credit card before she could do that, and his teenaged brain agreed.

Problem is, he doesn't have a credit card, only a debit card.  But not to be thwarted, he took a picture of his debit card and posted it on Facebook for the young lady to see.  You can probably guess where things went from there.

Fast forward to the next day, and Ronnie and Chip tried to see a movie.  It had already been agreed that Ronnie would pay for the movie, but when he presented his debit card, it was declined.  About that same time, I received a phone call from the bank's fraud department asking to speak to Ronnie.  It took another day for the fraud department, Ronnie, and the sign language relay operator to connect, and what he found out was that the young lady tried 9 times to charge something on his debit card.

Fortunately the fraud department stopped the transactions, and Ronnie didn't lose any money, but this could have been disastrous.

I had been randomly checking Ronnie's Facebook account - it's a requirement that my children share their passwords with me - but I need to do it more often.  We also had some more training on Internet safety, but I still wonder if such a situation happened again, would Ronnie's teenage brain rule over his training and common sense.  I'm afraid I know the answer...
Posted by Ashley's Mom at 11:53 AM No comments:

Haben Girma is the first deafblind graduate of Harvard Law School. She applies her unique perspective as a Skadden Fellowship Attorney at Disability Rights Advocates to remove access barriers for students with disabilities. The White House has recognized Haben as a Champion of Change.

The Autism community has done a bang up job of getting their message heard.  There are so many organizations, some good, some not so good, but all of which have the ears of some very important people.  The results are, to name a few:
Now I wish the Autism community, parents and professionals alike, would share their strategies, share those things which gets the notice and gets the dollars.  So many other disabilities, and yes, the numbers may be fewer, could use some of that notice and money.  It seems sometimes like the disability to have is Autism, not Down Syndrome, not Learning Disabilities, not Deafness or Blindness, and not Physical Disabilities.  If you want the school systems to pay attention to you, it seems it would be better to have Autism than to be deaf or blind.

I know this may sound a little bitter, and perhaps it is.  But after a total of over 20 years of having children with disabilities in our school systems, and none of those having a child with Autism, it gets a little frustrating watching new technologies, new teacher trainings, articles in the press, etc. all the while children with other disabilities often seem to be lumped together and the I in IEP forgotten.

I'm sure this post may upset some, but that really is not my intent.  I am just trying to understand how children with any disability can receive the services they need.
Posted by Ashley's Mom at 11:09 AM No comments: 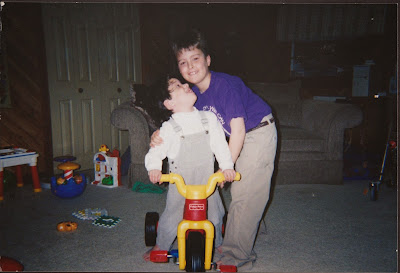 Check out this video that my son, Ronnie made for the Sportable Annual Report. Then go check out the whole report. You will be amazed at the great things this organization is doing for athletes with disabilities!

One Child Assaulted, One Child Murdered

Some of my fondest memories of childhood are of exploring my neighborhood with my friends, playing in the swampy area behind our houses, riding our bikes until darkness rolled through the streets....but children today can't build those memories. 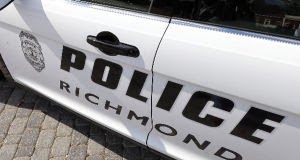 Their parents must keep them in sight at all times.  The children sense their parents' fear and become fearful themselves.  And then, if just for a moment children shed the fear and become their happy, carefree selves, something like this might happen, and it, and other horrible things, are happening more frequently.

We need to take back our neighborhoods.  We need to let our children enjoy their childhoods without fear.  We need to end this senseless violence...