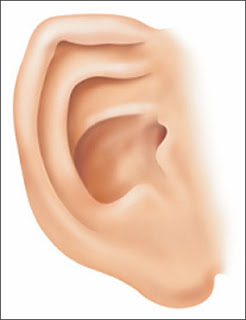 Yesterday's visit was with an ear/nose/throat doctor and his audiologist. I have to give the Social Security folks credit for at least picking a doctor's office close to our house, but I wasn't thrilled with this particular ENT. I had seen the ENTs father for ear surgery for myself about 25 years ago, and I wasn't happy to say the least, and ended up having to have a second surgery 6 months later with another doctor. But, this was just for Ashley to prove she is deaf, so I thought it wouldn't be a big deal.

It was obvious that this particular doctor and his office staff don't usually deal with people with significant disabilities. Nothing in the office was arranged to make wheelchair accessibility a priority. In addition, no one signed. I just don't understand why a doctor and his staff work with people with hearing impairments and don't know how to sign...

The first part of the visit was testing in the audiology booth. I never know exactly how Ashley will respond to that - sometimes it has been ok and other times it has been a disaster. Yesterday wasn't too bad. Ashley cooperated and the audiologist got a pretty good reading. Unfortunately, it showed that even the little bit of hearing Ashley has in one ear has gotten worse.

The second part of the visit was seeing the doctor. I did my best to tuck away my thoughts from the bad dealings with his father, and hoped for the best. He was ok - not the least bit disability aware or friendly - but at least he was willing to admit that. He looked at her ears, and then looked at the audiology report, and finally said attempting hearing aides would probably not be worth the effort. Of course, I already knew that, but I smiled and thanked him. I wanted to make sure I played nicely so he would give an appropriate report to Social Security, and I think he will.

So, one down and one to go. Hopefully after that we will get a disability determination. So far, it's only taken 4 months :)