How Will It Be Made Right? 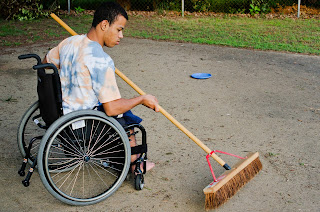 My son, Ronnie, receives respite and personal care services through our state's EDCD (elderly and disabled consumer directed) Medicaid waiver. He receives these services because he was screened by the agency that administers the program and found to be in need of the services. The only other alternative, according to their screening, was placement in a nursing home. Because of his spina bifida and kidney disease, he needs full assistance with bathing and other personal care tasks as well as with his bowel and bladder management program. The services, which have been authorized for many years, allow a personal care attendant to assist with those things. The personal care attendant is paid by a contractor organization in agreement with our Medicaid agency.

Everything has been fine for years.

But for whatever reason, the annual reauthorizations for everyone in the state receiving services under the EDCD waiver got backlogged. So backlogged that many people went without services for months. Ronnie was one of the lucky ones because his services have only been stopped for about three weeks now.

It's not that the people won't get reauthorized. They will, but for some reason a gigantic backlog occurred. What I think our Medicaid agency hasn't realized, or refuses to acknowledge, about this situation is just how many people have been affected, and it's not only those people authorized to receive services.

The whole "let's keep people in the community rather than institutions" movement by providing home and community based services relies on four sets of players - the medicaid agency, the service facilitator who is a person or company that helps translate what is approved into what happens for a person with a disabilitiy, the person with the disabilities serious enough to qualify for nursing home placement but who wishes to remain in the home, and the people who provide the services - the personal care attendants and respite providers. And in a great many situations, the family of the person with a disability also enters the equation.

So by allowing a backup of authorizations, our Medicaid agency is affecting the ability of our service facilitators to run their businesses, which results often in a loss of business. It goes without saying that the person with the disabilities is affected because they no longer have the supports they desperately need to keep them out of an institution. And the service providers, those wonderful folks who do things like manage bowel and bladder programs for a mere $9 an hour, lose their income, can't make car and house payments, can't provide for their families, and must move on to another job. Thus the person with a disability is affected yet again because finding personal care attendants is in no way an easy job. And finally, if the person with a disability has family support, those folks are affected because they may be having to pay out of pocket (if they even can) to keep the personal care attendants, all the while managing their own panic at the thought of their loved one being institutionalized.

Our Medicaid agency has said publicly that they intend to have the backlog handled by this Friday, September 27th. We'll see, but I have some questions for them. Why did this happen? Why weren't we notified before our attendants submitted time sheets which were denied? What are you going to do to make sure this doesn't happen again? And, what are you going to do to make this 'right' for all the people with disabilities, their families, their attendants, and their service facilitators who have suffered?
Posted by Ashley's Mom at 11:52 AM

This happened to us..our annual renewal was in July so the respite renewals were almost at the same time and I was freaking out. Our SF pushed and pushed and we ended up not missing a pay cycle for attendant but it was close. I think the timesheets were due Friday and I did them on Tuesday and it went through.

We are at just over 3 weeks now without payment for the aide. It's just crazy to me that a broken administrative process is allowed to negatively impact so many people.