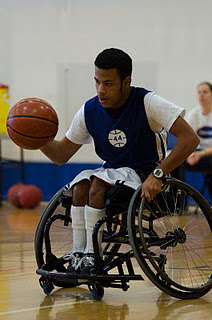 Back in 2009, I wrote a post about a phone call I received from a Navy recruiter. This recruiter wanted to talk to my daughter, Jessica about her plans for when she exited school. It was obvious while I was talking to him that his purpose was to recruit her for the Navy.

Well, it's happened again. This time it was an Army recruiter calling for my son, Ronnie.

My son, Chip had answered the phone and again, the recruiter starts his speech and makes it difficult to get a word in edgewise. But finally, the recruiter took a breath, and Chip started talking. He described Ronnie's deafness and spina bifida, but said he was a great kid and would be a real asset to the Army. The recruiter got very quiet, and then apologized for calling.

Perhaps the recruiters just get lists of students from the high schools. Perhaps the recruiter knew that I had another son who had joined the Army after high school. But however the information was received, can't the recruiters be a little more sensitive before making these phone calls? Couldn't they ask the schools to mark any students that should not be considered candidates for the service? I am the last person to want to apply labels to people, but in this case I think the label would be better than forcing a family to accept yet again failed dreams they may have had for their child.