A Bite of the Big Apple? Maybe Soon... 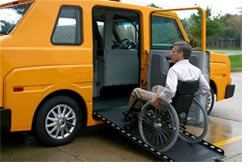 I have always wanted to take my family to New York City. I think Ashley would love the lights and action of Times Square, and I would love the shopping! But knowing that I have two people in wheelchairs has kept me from attempting that trip. I worry about the normal accessibility issues like wheeling through large crowds of people or navigating store displays which seemed designed to prohibit wheelchair travel. But, since driving our car in the city would probably be lunacy, we would be at the mercy of taxis, and the majority of the taxis in New York cannot accomodate wheelchair users.

But that is about to change. City officials announced a legal settlement Friday mandating that at least half the city's taxi fleet be wheelchair-accessible by 2020. The details still need to be worked out, and of course there is the question of who is going to pay for the new taxis, some of which can be upwards of $15,000 a vehicle.

The agreement requires the Taxi and Limousine Commission to propose rules that would phase in the new, accessible cabs by attrition. No cars on the road would be required to undergo upgrades, but half of all new vehicles brought into service would be required to accommodate wheelchairs. The average city cab has a lifespan of three to five years.

And I am sure that passengers are going to see higher fares, a rationale for having to make the changes. Will it be worth increased fares to the wheelchair users who can finally move around the city? I know for my family it would be. So maybe by the time I retire in 5-6 years, that trip to New York City just might become a reality!

Greetings from the Apple. The buses, and many subway stations, are accessible. Your concern about the Times Square crowds is on the money, though. We natives just holler "ramming speed! and the tourons stop gawking and pay attention. Stores, likewise, are a big problem, but most of them are chain stores or junk shops; the ones with interesting merchandise are making enough money that they don't have to jam every inch with merchandise. Check out Tiffany's, for example. Like transit, our museums have taken access to heart. The Met, for example, has a program that promotes art access for the blind, using replicas of works with raised textured enhancements... if you come, please don't take up 3/4 of the width of the sidewalk when you stop to gawk.