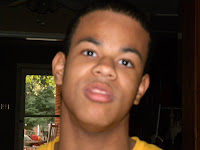 Over the years people have asked me if I have to parent my adopted children differently than my birth child. Well, at least in my family, the answer is yes and no.

Everyone in the family has basic rules to live by. For instance, no hitting is allowed - calling some stupid is forbidden - and making fun of someone in a malicious way will not be tolerated. If someone breaks ones of those rules, there will be consequences. It usually doesn't take too long for any child to learn that - whether they joined the family by birth or adoption.

But sometimes the differences are more subtle.

This past weekend, Ronnie made some very bad choices - choices that cost his brother, Chip, about $100. I don't think Ronnie did it on purpose, but I do believe that he wasn't thinking about what choices he was making.

Once the offense was discovered, a discussion ensued and consequences were doled out. And that's where things got interesting. Ronnie sat stoicly through the discussions about his poor choices, and when Chip told him that he was NOT happy, the briefest flicker of fear passed through Ronnie's eyes. When the discussion was over, Ronnie went to his room and curled up on his bed.

Here was a time when a child had to be parented differently.

Since I just became Ronnie's parent 7 months ago, many, many things happened in his life before he joined our family. His time in foster families may have resulted in poor parenting, different parenting, and maybe even no parenting. Ronnie really had no reference point when he became a part of our family. He needed to learn that even if he made bad choices, it didn't mean he was a bad person.

In his most recent foster placement, Ronnie made a bad choice, and from that point forward, the foster dad made up his mind to have Ronnie removed from the family's home. The fear I saw flicker across Ronnie's eyes during the discussion about the poor choice he made this weekend was very real, and Ronnie probably wondered if now he would be moved from our family.

I hope that after a longer discussion in his room - a discussion during which he was told he was loved and nothing, absolutely nothing, would cause this family to want him to leave - he felt better. He did seem to perk up, so I am hopeful.

That is one example of how an adopted child might need to be parented differently. It' not rocket science - it's just understanding that your child has many life experiences that you have not shared.

In time, I believe Ronnie, and most adopted children, will relax and learn that the words forever family mean forever.
Posted by Ashley's Mom at 6:00 AM