State-run institutions will soon be a relic of the past in Georgia under a landmark settlement reached Tuesday that could serve as a model for similar efforts in other states, Justice Department officials said. 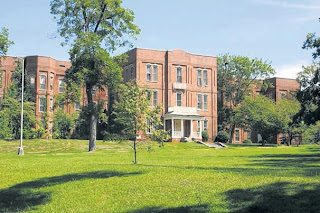 (Built in 1842, Central State Hospital was Georgia's first psychiatric hospital, chartered by the legislature in 1837.)
Posted by Ashley's Mom at 6:00 AM