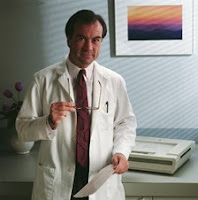 In the last couple of weeks, we've been to a neurologist, a rheumatologist, a nephrologist, and an urologist. I'm really tired of ologists...

But a lot of good has come out of all those visits.

Ashley's seizures are slightly more controlled. She started on a new medication and had an old one removed. The new med seems to be doing a good job, and she's not even up to full dose on it yet. In addition to fewer seizures, she also seems to feel much better which makes her happier. Score one for the neurologist.

Ronnie saw a new nephrologist and reports are good. His kidney disease is stable - not better but not worse either. The doctor thought Ronnie looked very healthy and is encouraged that we can keep a kidney transplant at bay for quite a while longer. Score one for the nephrologist.

Ronnie also saw his urologist. The bladder surgery he had last summer has improved his overall health, and is no longer a contributing factor to his kidney disease. Score one for the urologist.

My rheumatologist has tweaked my lupus and rheumatoid arthitis medications a bit, and I can already see a little positive change. Score one for the rheumatologist.

Okay, so maybe ologists aren't so bad after all!!
Posted by Ashley's Mom at 6:00 AM