Move To The Back...Of The Restaurant 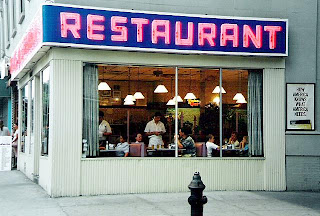 This might just be my imagination, but it seems that often a restaurant receptionist will seat my family in a far corner, away from the other diners.

It happened again this past weekend.

I can understand that we are seated wherever there is a table (instead of a booth) since Ashley and Ronnie use wheelchairs. But in the restaurant we went to for lunch on Saturday, we passed several open tables in the main area and were taken to the back. The only other diners there had a small child who was obviously not having a good day.

I've noticed this in nicer restaurants as well as the more family-oriented ones.

Do they think my children may make a scene? Are they uncomfortable with obvious disability and don't want to disturb the other diners? Is it uncomfortable to eat beside a person that is blind or a person with spina bifida?

Like I said, I hope it is just my imagination, but it really has happened enough times to make me think it's not. Have you experienced anything similar?

Since we eat out a lot as a family, I think I will start paying closer attention to try to figure this out!

ughhh how frustrating. Maybe you could just..ask next time?
"You know i'm just curious why we always go to the back is it for our convenience or yours?"

The only issue we had that was a big deal to me was the resturaunt at bass pro shops in Ashland. They told us we couldn't have a highchair (for M) at a booth. But P isn't stable enough to sit on a chair.

I was already having a bad day and think I snapped on the person who seated us by saying when she falls and gets hurt it's your fault not mine, lol.

Then they sat us at seriously the LARGEST table there. I couldn't reach either girl it was atleast 6ft x 4ft.

Needless to say, not a happy meal.

I then, emailed the customer service as was told that they were in the wrong. Their was no code that said highchairs weren't allowed at booths (which is what they told me) and that a previous manager had "made that up" because they didn't like high chairs at booths.

We ate there once since and luckily for them, they didn't try it again.

People don't understand how something so little can really throw off the entire dinner.