A Tale of Two Dependencies - Part 2 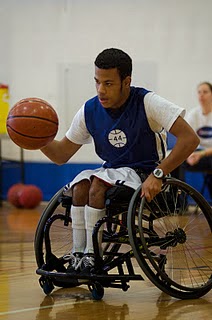 Yesterday I told you about Ashley and her independent spirit. Ashley is and always has been very stubborn, very strong-willed and very driven. While those qualities can sometimes be hard to live with, they have served her well and helped her make the advances she has.

Somewhere along the path of Ronnie's tumultuous past, he had learned to be very dependent. I know that as a young child with significant disabilities, it may have been easier to 'take care' of Ronnie rather than expect him to take care of himself. I also know that his past included many not-so-good situations, and Ronnie himself may have been afraid or at the very least, reluctant, to take the lead in his life. But, if he is going to achieve the level of independence he now says he wants, he's going to have to step up to the plate, and a great deal of that stepping up means attending to his medical needs religiously.

Here's one example. Ronnie must take a lot of medication. His kidney's are failing, his blood pressure is high, and his bladder doesn't work well. As a result, he takes hands full of medicines three times a day. Missing any of those medicines is not an option.

In all our discussions about living independently, Ronnie has been adamant that he can take his meds as he should, and can care for his other personal medical needs as he should. So I have decided several times to let him try. But the attempts have not gone well.

Video games, movies, chatting with girls, and other teenage vices have gotten in the way. Just last week he missed taking his medication multiple times.

For now, Ronnie has stepped back to let me manage his medicines and offer reminders about other medical needs. I know he gets frustrated, and like any 18 year old boy, longs for a life of his own. But somewhere, somehow, he is going to have to understand and accept what a life of his own means. I refuse to let him put his life in danger, and I hope he knows that is because I love him so much.

I want to support his goal of independence, but we need to work out the details, especially as it relates to medical needs.
Posted by Ashley's Mom at 4:00 AM

i use an app called medcoach (ios, altho i'm sure theres something for android if thats your flavor of devices) that sends a reminder for meds, and tracks what time they're taken, plus reminds you about refills in a predetermined amount of time.