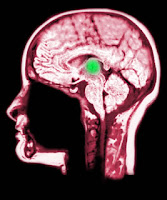 Something strange is going on with Ashley’s seizures – I’m seeing fewer of them. And to make it even stranger, I have stopped one of her seizure medications.

Ashley currently takes 3 seizure medications – Depakene, Keppra and Trileptal. A couple of months ago, I weaned her off Topamax at the direction of her neurologist. He wanted to replace the Topamax with a new seizure medication named Vimpat. Ashley tried the Vimpat, but the side effects were horrible, and I stopped giving it to her. I haven’t told the neurologist about that yet.

But just in the last couple of weeks, she is down from 6-8 seizures a day to 1, maybe 2, and they are of shorter duration and less intensity. The only difference in her meds besides stopping the Vimpat is that she has also been on Augmentin for an ear infection. Augmentin is a common addition to her medicine regime, so I can’t attribute the fewer seizures to that.

I just don’t understand it – but I am thrilled! Ashley seems happier, more carefree, and definitely less groggy from medication.

Has anyone else experienced this? Has stopping a medication or taking fewer medications actually brought a reduction in seizures? Might it just be a change in her body chemisty/hormones as she matures?
Posted by Ashley's Mom at 6:00 AM

I've read about a mom taking her kid off at least one seizure med, and the kid ended up having less seizures. Of course, this was online, and therefore not that reliable.

Of course, not telling your doctor about med changes is a bad idea, anyway.

I've heard of it before when a person has been on several seizure meds (sometimes up to six). But something about the antiobiotics is also triggering something with me,too, I just can't remember what.

How about if you just hold your breath, close your eyes and cross your fingers? Praying never hurts either, of course...

this isn't seizure related but my daughter's health improved once I took her off her Prilosec. She has been on meds for GERD since birth. I took her off her inhalers because she has survived every cold this school year without getting pneumonia or bronchitis. I read an article just before she saw a specialist about her GERD that said that many people have had higher incidences of pneumonia with long-term use of Prilosec. I am not a fan of medications and don't give them to my kids unless the benifits outweigh the negative side effects and risks. If Ashley has been on all kinds of meds for years she may not need them anymore because her body has changed. Maybe the combination of all her meds has actually been causing some seizures. I also haven't told my daughter's doctor yet that she is no longer taking her inhalers. I feel that doctors really push medication these days because it makes them money and/or they don't know much about the negatives of most of the drugs they prescribe. I think a lot of drugs are rubber stamped by the FDA. Just look at all the drug recalls in the past several years.