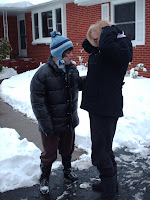 We had snow this weekend – 13 inches of it! This was the second heavy snow in two months for an area that often goes years between even dustings of snow. It was absolutely beautiful, and we loved watching it come down in big fluffy flakes. But, after about a day and a half, Ashley was ready to ‘go car’.

Although it often surprises me given her deafblindness, Ashley is a very social person who just isn’t happy unless she is out in the world as often as possible. After a long week at school, she can relax and lie around the house for a while on the weekend. But the lure of riding in the car, strolling around the mall, visiting the Science Museum, or shopping at Target is just too strong. She must ‘go car’!

Thanks to the efforts of her brothers who shoveled the driveway, we were able to go for a ride Sunday afternoon. The primary roads we ok, but the secondary roads, especially in our neighborhood were still snow-covered. She didn’t mind. The fishtailing of the car and the bumps over snow piles had her giggling and signing ‘more’.

Though she doesn’t like being in the snow herself – she will stand perfectly still and complain loudly – she really does like riding in the car in the snow. Maybe it’s the same reason she loves roller coasters.

She's my darling little daredevil!! So how do you keep your children with disabilities occupied during snow storms?
Posted by Ashley's Mom at 7:00 AM

I'm about to back the cars out of the garage and turn the two-car garage into a sensory circuit for my two little one's who haven't been outside near enough.

Eight and half inches this weekend. No school Monday, two hours late today, threat of no school tomorrow and scheduled teacher training on Friday...no school.