What If WE Shared OUR Lives? 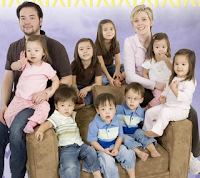 As I watched the show Jon and Kate Plus Eight on TLC last night, I started thinking about how great it would be if TLC did a similar show about a family that had a child with a significant disability. Well, maybe it would be great…

How do you think viewers would respond? If they saw my Ashley having dinner with the family, burping as loudly as she could, and then laughing hysterically, especially if her brothers started laughing at her, would they think it was amusing?

If the cameras followed me on the six trips out of bed each night to go to her room, yell at her to get back into bed, find the vibrating toothbrush she likes to put in her mouth to help her get to sleep, and find the exact right piece of wire (must.be.the.red.white.and.blue.one until it must..be.the.purple.one until it must.be….) that she needs to hold while drifting off to sleep, do you think the viewers would be thanking their lucky stars they weren’t me?

Would the viewers feel sorry for her when I insisted she dress herself and put her own shoes on? Would they believe me to be the worst mom in the world when I made her do her own laundry? Would they even understand that a 13 year old deafblind child IS capable of doing her own laundry?

If the viewers had young children themselves, they probably could relate to how long it takes us to get ready to go anywhere. And they could probably relate to always having a mess around the house. But would they be repulsed by tube feedings, seizures and the like? Would it make them stop watching the show?

Would getting to know my family or your family have a positive impact on viewers, or would they do what a lot of society does without the TV show – ignore us and give thanks silently that it is us and not them? I wonder…
Posted by Ashley's Mom at 11:20 AM

I've read enough talented bloggers to believe your family could be represented exactly and with both humor and respect in a tv sitcom. Have you checked-out [with]tv?

I wonder, too. I'm sure some parts of your life (the burping one, especially!) would be humorous to people! I wonder if maybe it would bring some understanding to people who haven't experienced anything like that. It probably ALL depends on the editing, you know. They can edit a show to make it whatever they want. They could show the funny, tender, sweet parts of life, or they could show parts that make it seem awful.

But to be realistic, they would need to show both parts, wouldn't they?

I think if it was realistic, both the good and the bad, it would, in large part, turn people off. But if done well (and realistically), the sweet, funny, tender parts might at least give viewers some cognitive dissonance. Turned off and somewhat grossed out on the one hand but drawn in and somewhat connected on the other.

And then ... the good, the bad and the ugly ... they would have much more of a true sense of our lives. Find us harder to ignore. And to pity, when they are forced to turn their minds this way. That perhaps is the best we could hope for. Because I don't believe that people can truly "get it" until they live it.

So yeah, I think it could be done. Good luck finding somebody willing to take a chance and actually try it though.

I've wondered that too. That is reality TV. People are so fascinated with lives that are different than their own, I'd love for them to walk a day in ours, the issue would be being able to portray those moments that to us are funny and sweet in the right light.

I have had the exact same thought. Back in the day when things were really rough...I can't imagine wanting anyone to watch that. I love that show. Joe can't stand it. M makes fun of me for watching it and says, "Those kids whine too much! Shut it off!" Too funny!