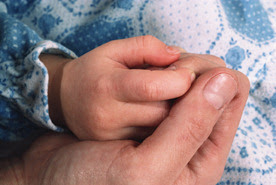 Last week I wrote about a new mom who had just recently given birth to twins. One of the babies didn't survive childbirth, and the other had significant disabilities. The NICU nurse asked me to stop by so the new mom and I could chat.

Many of you offered suggestions on what I should say or do during that first visit, and I appreciated each and every one. I'm a person who wears her emotions on her sleeve, and I knew I would have a difficult time knowing what to say and do. But because of your suggestions, I had a plan, and it really helped.

The mom and dad were both there when I arrived. Although their beautiful daughter was staying in the hospital, they had been released themselves a couple of days prior to my visit. Reluctantly they went home for a few hours each day but spent most of their time back at the hospital.

I could see the pain and uncertainty in their eyes, but I could also see the strength in their souls. I knew almost immediately upon meeting them that they would all be ok. The journey to ok might be a long and difficult one, but they leaned on each other and seemed to draw strength from each other. And the love for their daughter was so intense that I almost felt like I was intruding on a very private moment each time they looked at her.

Mom talked about the sadness of losing their other daughter. She cried but all the while rocked and stroked her surviving daughter. The funeral was planned for the day after my visit, and while I'm not sure that in that same situation I could have withstood the pain and loss, this new mom seemed distraught but without losing hope for the future.

Dad talked about having to go home and remove the doubles of everything baby - one crib instead of two, one swing, one car seat, etc. A darkness clouded his eyes as he described the removal, but a small light came back when he talked about donating the extras to a homeless shelter for mothers and their children. He stood with his hand on his wife's shoulder and frequently leaned down to kiss both her and their baby.

I softly worked into the conversation the story of Ashley and how I came to be her mother. I spoke of the challenges but also of the triumphs and joys. I told them about the supports that were available, and how much they had helped Ashley and me over the years. I described Ashley as an infant - not so different from their new little one - and then I described her today - a feisty, opinionated, happy teenager, a child who proved so many people wrong. I threw in the fact that some challenges would be daunting and that they might need to fight and fight hard along the way to obtain what their daughter would need. I honestly told them that some days would be darker than others, but that the light would shine more often than not.

I showed them some pictures and shared some funny stories. And I told them that whenever they needed anything, whenever they felt like talking, or whenever they just wanted a shoulder to cry on that I would be there.

I think the fear of 'aloneness' in their situation was what frightened them the most. I hope that after my visit, that fear was lessened a little bit.

They are a lovely family, and I think they will survive this, and overcome whatever challenges are thrown in their way. I will stay in touch, and I will keep all of you informed also. Please continue to include them in your prayers....
Posted by Ashley's Mom at 5:00 AM

You are such an inspiration to all of us . I am sure you brought them such peace and hope . Amy Payne

I for goosebumps reading your blog today. I am sure you said just the right things and I am glad to hear how they are already looking forward. My thoughts are with them. I wish more parents of newborns with special needs had a parent like you to speak to.
Lisa