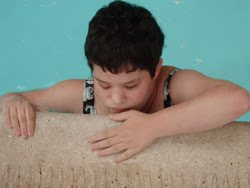 (BTDTGTS = been there, done that, got the t-shirt)

Ashley starts ESY services on Monday. Six weeks of going to school for 1/2 day, 4 days a week. Six weeks of sweltering rides on an un-airconditioned bus. Six weeks that are supposed to keep her from regressing but actually do little more than *teach* her to make tie dyed t-shirts and play in water.

I fought so hard to make sure Ashley had ESY services, and I do think it is a nice change of pace for her from the summer slug time she has had at home for the last three weeks. But I do wish more real academics could be presented to ESY students.

We will also have the same battles we have every summer. Ashley will have to adjust to at least 2 different bus drivers and 2 different bus aides, and there may be more than that. For some unknown reason, ESY services are broken into two sessions - a 4 week session followed by a 2 week session. And there is different bus staff for each. If we're really lucky, she will have a different driver and aide for the morning and the afternoon, upping the number of people to a potential of 8.

The ESY teacher is someone Ashley has never met, and I'm betting has no idea how to teach a child with deafblindness, or deal with Ashley's unique seizure activity, or even how to communicate with Ashley. There will be an aide assigned to Ashley, and it is someone that works at Ashley's regular school - but it is someone who doesn't sign fluently.

There there is the aide she had for several years in middle school who does sign and who will also be working summer school. That might sound like a good thing, but Ashley and that person had a breakup on a professional level at the beginning of last summer, and continued contact (at least on Ashley's part and definitely on my part) will be most unwelcome.

But Ashley can be very 'go with the flow' and will probably be excited about a change in routine. And right after ESY is over, we will be going on a fun family vacation.

So, I will continue to homeschool and keep my fingers crossed that she doesn't catch any illnesses at summer school. I just really wish that ESY could be as it was truly meant to be...
Posted by Ashley's Mom at 5:00 AM

I hate ESY. I understand all the problems inherent in sending a child there. The teachers aren't the same (probably don't have the correct training), the paras and therapists aren't the same, geesh, even the classrooms aren't the same. Unfortunately, many of us went into teaching to have our summers off, or the rates they pay us stink :(. Luckily our county does have an alternative, a special needs camp the kids can attend for a full day, if you have the money or can find the funding. I don't have any answers, only complaints :) so I am not much help.