Can I Take Your Order, Please? 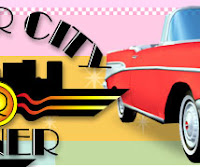 Sometimes something so unexpected happens that you’re caught off guard. But if it is a good unexpected, it can brighten your whole day. One of those good unexpecteds happened last Friday.

I decided to take the kids out to lunch at one of their favorite places, the River City Diner. It’s a restaurant that strives to be like the diners of old, and for the most part, it succeeds. The menu is filled with diner staples such as meatloaf, mac and cheese, and breakfast any time of day. The walls are decorated with 1950’s replica memorabilia, and doo-wop music plays from the jukebox. So, it didn’t surprise me at all when the waitress greeted us with a ‘Hey, Sweeties.” What did surprise me was what happened next.

The waitress signed to Ashley. She signed ‘good morning, how are you today, Beautiful?’ She asked all of us what we would like to drink, and signed the same thing to Ashley. When she returned with our drinks, she asked me if she could show Ashley that her water was now on the table. I responded ‘Yes’, and the waitress gently took Ashley’s hand and put it around her water glass. Ashley signed ‘Thank you’, and without missing a beat, the waitress asked for our orders. When she got to Ashley, she signed, “What would you like to eat?” Ashley signed ‘Macaroni and cheese.” The waitress then left, and I sat speechless.

The exchange with the family, and especially Ashley, was completely natural, almost as if the waitress took orders in sign language every day. She was sensitive to Ashley’s vision issues without even having to ask me what was wrong, or what her vision was. She took close note of the appearance of Ashley’s eyes, and rightly assumed she would need some assistance. She didn’t speak to Ashley as if she were a 5 year old – she didn’t ignore her and talk to me instead like a lot of people do. She gave Ashley the same respect she gave every other member of my family.

The waitress may have been working in a low-paying, often thankless job, but to me she was an angel – a person who ‘gets it’ – a person who should be a role model for the majority of other people in the world.

When it was time to leave, I felt like hugging her. Instead, I signed ‘Thank you very much”, and needless to say, left a large tip.
Posted by Ashley's Mom at 7:25 AM

That gave me chills. How absolutely wonderful. :)

I would call the manager and tell him how great the server was and thank him. :)

A very heart warming story. Wouldnt it be fantastic if this was the norm.

Love encounters like this! I do hope you'll write to the diner and let the manager know of the excellent service you received. :)

Yes, do pass on to the manager in some manner the excellent service you received and how much you appreciated it. What a great story.

But if I may ask a stupid question, Ashley is deaf and blind, yes? I take it since she uses sign that she must be low vision as opposed to actually blind? Just trying to figure it out. Thanks.

MMC, the term deafblind means any combination of hearing and vision loss combined. Ash is profoundly deaf in her right ear and has a severe loss in her left. She is totally blind in her left eye, and her vision in the right is 20/2000. She prefers that people sign directly in front of her good eye as opposed to tactile signing. She will tolerate tactile but doesn't prefer it.

This one brought me to tears. Wow. I would say that perhaps she is in the wrong profession and yet what a great profession to be in when you are serving so many people every day. A great story. I wish I could have been there.

When we lived in Jersey we loved the diners there. I swear I gained a lot of weight from the great food though. Every now and then I crave their grilled cheese sandwiches. Yum! They were soooo good!

That...is awesome. How wonderful for Ashley and for you!

This let me teary eyed. What a neat thing to have happen!

That brought tears to my eyes. I'm so glad you had that experience.

Wowza! Thanks so much for telling the story - an absolutely fabulous experience! I call the waittress Angel.

My son is HOH and has prominent blue hearing aids. One time on vacation (ds was 6yo)our family we went to a restaurant that had a lot of TVs. The waiter sat us down near the TV that had Closed Captioning. Me and dh were really impressed by that.

I am glad that you had a great experience at that restaurant. Go ahead and give them a shout out. Maybe we should all go there if we are in that area.

What a fabulous experience!

Happiest of outings! I'd be heading back there for every special occasion--even if you miss that server's shift, the owners need to know that her fine, graceful, skillful, polite work brings customers back for more.

I have goosebumps! How wonderful, and encouraging. I'd eat there everyday.

Gee, what a find! Be sure to praise her to her boss!

Wrote about it here:
http://www.disaboom.com/Blogs/deafmom/archive/2008/10/13/the-language-of-connection.aspx

Karen, thank you for sharing the story. I'm already planning another trip to the restaurant this upcoming weekend!

Now how cool is that? I am so glad you had a good experience there! It is one of my favorite places to eat because not only the food but the waitstaff. Haven't been in awhile, maybe we'll have to again.
.:Krishanna, Active Gray Matter

I absolutely treasure the wonderful moments!!! It was great to have this in the blog carnival.