Signing in a Hearing World 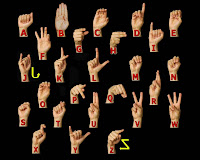 When we were returning from our trip to Williamsburg this past Saturday, we decided to stop for lunch at the Candle Light Restaurant. It is an out-of-the-way little place that is frequented more by locals than tourists, and on previous trips we were impressed by the home-style quality of the food.

Although the building had been remodeled a bit (and made more accessible!), the owner and staff were the same as was the menu. A server came by and took our orders, and right after that another person stopped at our table and asked about our drinks. I mentioned that the server had taken the orders, but this person said she would get the drinks.

I noticed something in her speech, a quality to her voice that seemed both familiar and different at the same time. I couldn't quite put my finger on it. But the next time she stopped by our table, I figured it out!

She had apparently seen all of us signing to each other, so when she returned to the table, she also signed. She was Deaf or hard-of-hearing and the quality I heard in her voice was that of a person who leans to speak without fully being able to hear.

Ronnie was thrilled! He loves to come across people who sign, people with whom he can easily communicate. I love to see him get so excited, but it also is a bit sad.

That which most of us take for granted - the ability to converse with others - doesn't come easily to someone who is Deaf and lives in a hearing world. I wonder if it bothers him, or if he is just accustomed to it...???
Posted by Ashley's Mom at 5:00 AM